Blog: Count the pelicans despite the war

At the end of December, an ornithologist Maksym Yakovlev and a zoologist Oleksandr Gaydash traditionally went to the Ukrainian part of the Danube Delta to count the Dalmatian pelicans. Due to the war, access to some areas was limited or even closed, but scientists managed to do the counts in many large water bodies of the delta.

“War imposes many restrictions and brings many changes to everyone, even in areas far from the front line. Rockets reach any corner of Ukraine, and many border areas are also closed to visitors, including scientists, due to martial law. The Danube Delta is shared between three countries, so for example access to the outer delta, the richest in life, is currently impossible. It is very unfortunate, because pelicans love this quiet spot inside the core area of the Danube Biosphere Reserve, but this year we were not able to make the counts there,” says Maksym Yakovlev.

Nevertheless, scientists examined the lake Sasyk, Stentsivsko-Zhebryanivsky floodplains, and Danube lakes: Kitaj, Yalpug, Cahul, Katlabukh, Lung, Kugurlui. Special attention was paid to the territories where Dalmatian pelicans were observed wintering in previous years. Inspection of open areas and water areas was carried out with the help of binoculars and a telescope. They were also unable to use drones for the counts over the war restrictions. But the weather favored the scientists: there was no rain, with a touch of frost overnight, although the lakes were not covered with ice. The roads were well-passable, which made it possible to search all water bodies open for visits.

“We continue monitoring birds even in this turbulent time because this is the job that should continue. The history of bird counts in the region goes back for decades. As difficult as it is, we try not to have gaps in the data. In addition, it is a bitter but unique experience of seeing how nature reacts to the changes brought by the war,” adds Oleksandr Gaydash.

It is obvious that, under all circumstances, scientists recorded much fewer Dalmatian pelicans than in previous years. Only in the lower parts of lake Yalpug and lake Kugurlui, they found several groups of pelicans, a total of 21 birds. By comparison, last year at the same time in the delta, 119 individuals were counted, and sometimes in warm winters, huge gatherings of more than 150 Dalmatian pelicans could be seen in the outer delta. 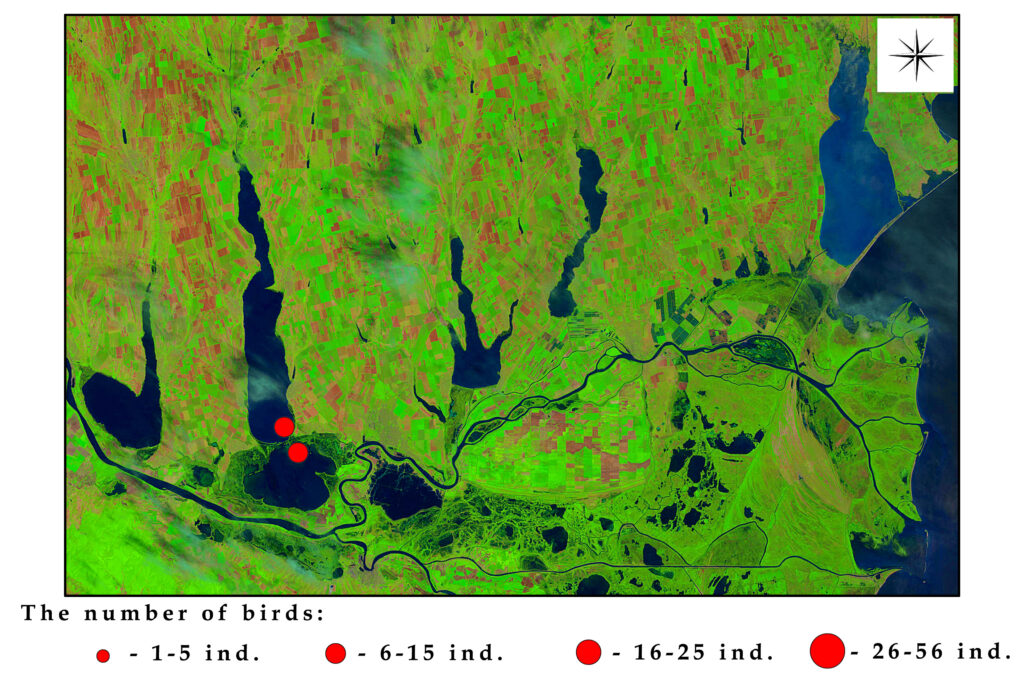 “In addition, 2022 was a very low-water year. Some areas where pelicans were found in previous years have almost completely dried up, such as Lung lake. Some areas have just started to inundate after a long period of drought. These are natural processes, but still, we did not see pelicans in these areas, which are their usual feeding places,” says Maksym Yakovlev.

The breeding season of the Dalmatian pelican will begin soon, and scientists hope that more birds will visit the Ukrainian part of the delta. In the past years, the nesting conditions for these majestic birds have been improved in the outer delta and one of the Danube lakes: a few breeding platforms have been built there. They are surrounded by water, so predators cannot reach the eggs and chicks, making the platforms an attractive nesting site. The platforms replace natural islands, which were once abundant, but due to the large-scale destruction of floodplains throughout Europe, there are not many left. So while conservationists work to restore floodplains, pelicans find temporary shelter on nesting platforms.

Simultaneous counts of the Dalmatian pelicans were also held in Greece, Bulgaria, Romania, Albania, and Montenegro. It is important for scientists to learn about the number of birds in the region as a whole, as well as in individual sites, to note which places they choose for feeding, resting, or nesting. This will improve the planning of conservation efforts to return this majestic bird to our landscapes. The census took place within the framework of the “Pelican Way Of LIFE” initiative, with the financial support of the LIFE Program and the Arcadia Foundation. In Ukraine, the project is implemented by the Rewilding Ukraine together with the Danube Biosphere Reserve.

Breeding platforms for pelicans installed in the Danube Delta in Ukraine