During 12-14 of December 2020, 567 Dalmatian pelicans have been counted in their preferred wintering areas in southern Romania. An additional 62 birds have also been recorded in the Danube Delta, in Maliuc area and close to Sulina. Adding to this number, a total of 812 DPs have been recorded by our colleagues in Bulgaria south of the Danube and along the Bulgarian Black Sea coast.

The counts are part of the monitoring program that is implemented in the frame of the Pelican Way of LIFE project in the region.

“Winter counts have been included in the monitoring plan that is being carried out in our project in order to have an accurate image of the congregations in the distribution range of the species in the first part of the winter. We aimed to cover as much as possible the project sites where the birds gather outside their breeding season, but also tried to find out if there are also pelicans in other areas that are not included as project sites” says Sebastian Bugariu, project coordinator for the Romanian partner, the Romanian Ornithological Society.

Despite adverse meteorological conditions, which have not been very favorable for field activities (strong winds, fog and rain), the six teams of SOR have been visiting most project sites such as Iezer Calarasi, Balea Mostistei, lakes on Lower Olt river and Olt-Danube confluence, Bistret, Danube Delta and the lagoon area, plus the sites along the lower Danube located in the south-western part of Dobrogea (Bugeac, Oltina, Dunareni, Vederoasa) 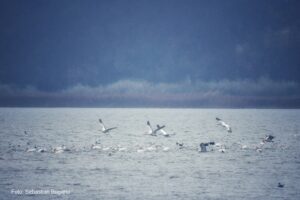 The second synchronous count this winter, which is traditionally carried out every year between the 10th and the 20th of January, is the International Waterbird Count. The data that has been collected as part of this action will be used in conjunction with the data obtained in December to establish the number of DP that are wintering the region.